Baby Blanket Number 5 is finally on the loom!  I admit that I was getting nervous.  My niece’s baby is due in late November and here we are in late September already.  I had come up with the design.  My grand-niece is to be named for my grandmother.  My grandmother was a prolific quilter whose favorite pattern was Grandmother’s Flower Garden, a design based on hexagons.  I do quilt, but I wanted to make my grand-niece a woven baby blanket (my specialty) that evoked my grandmother’s favorite quilt pattern.  This isn’t the first time I’ve come up with a design that I can’t weave because I don’t have the loom, but it’s never a comfortable situation.

Normally I weave my pin loom baby blankets on a square pin loom.  I knew there was a hexagonal pin loom available, which should have been perfect for the job.  However, I never cared much for the generation 1 version of the Turtle Loom.  Instead of pins, nails were used, which I found rather klunky.  It’s not easy to slide the finished piece off a loom over nail heads.  Two of the nail heads were painted white to indicate the top and bottom of the loom.  I questioned the permanence of the paint.

Generation 2 of the Turtle Looms were due out about the time I completed Baby Blanket Number 4, reviewed earlier.  Nails had been replaced by pins and the painted nail heads replaced by marks in the wood frame.  This seemed like it would resolve all my issues.  I was hoping to take the Baby Blanket Number 5 project along with me on my recent trip to Colorado.  Unfortunately, there were delays in manufacturing so starting the blanket was delayed.  Yesterday, as I came in to teach my monthly beginning rigid heddle weaving class, the shop owner told me that the generation 2 Turtle Looms were finally in!  I grabbed one and the yarn I needed and got started.

So this blog post will also be a review of the Generation 2 Turtle Looms; the Good, the Bad and the Ugly. 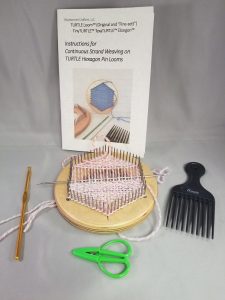 In addition to the Turtle Loom and the yarn, you’ll need a pair of scissors.  I try to keep a small pair with every project as as chasing scissors is one of my least favorite activities.

The Turtle Loom is easy to use.  Experience with the Schacht Zoom Loom isn’t necessary.  It helps in some ways and actually hinders in others.  Because the the loom isn’t warped as the square pin looms are, there is some unlearning that needs to take place.  Once you realize that they are two different looms, it’s easy to use the Turtle Loom

The enclosed instruction booklet provides clear, well illustrated instructions.  It took me almost no time to get the hang of using the Turtle Loom

The pins that mark where the weaving changes from triangular weave to rectangular weave area clearly marked in the wood frame.

The pins that mark the top and bottom of the loom are clearly marked in the wood frame.

It’s easy to slide the work off the Turtle Loom now that pins are used instead of nails.

While the  Generation 2 Turtle Loom looks more professional with its pins instead of nails, there are still some areas that could be improved.

The top and bottom pin markings in the wood look like the wood was split and dye poured in.  I think the marks were actually made with a wood-burning tool, but it really looks like accidental wood splits.  This is picky of me, I know, but I feel that more professional-looking marks could have been done.

To start the weaving, it’s necessary to tie a slip knot in the yarn and put the slip knot over the top pin.  The yarn tail, which will be used for sewing the hexagons together, gets in the way when the weaving is begun.  I’d like to see a notch such as Schacht uses on the Zoom Loom to hold the beginning tail of yarn.  It keeps the yarn tail from interfering with the weaving.

The pins are uneven.  I don’t mean the difference in spacing between the top/bottom pins and the side pins, although I question whether they’re right, I mean that what should be pins on a straight plane are actually slightly uneven and the pins themselves are not driven into the wood straight.  These defects don’t seem to affect the weaving, but they contribute to the loom looking unprofessional.

Overall, I like the Turtle Loom.  It’s easy to use and produces a different kind of woven shape.  I’m looking forward to this “Grandmother’s Flower Garden” woven baby blanket.  I hope my great-niece will like it!

After a desultory baby blanket couple of months and a rush to the finish on Sunday, I’m pleased to report that Baby Blanket Number 4 – the blanket for my Starbucks barista’s baby – is off the loom, finished and delivered.  I’m pleased with it… I think.  There were a couple of places where the rainbow block and the tonal blue block came out so close that it’s hard to know which is which.  Overall, I think it’s a winner.  It started as my least favorite of the blankets and may be my second favorite behind the Blue Blanket (Blanket Number 3).  So without further ado… 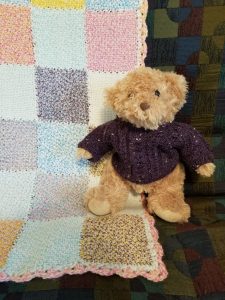 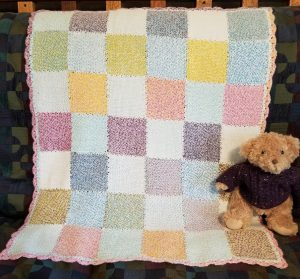 Here’s the Fourth Blanket!  (Is this the Doctor Who of woven baby blankets?  At least it doesn’t have a long scarf.)  You can see the “too close” blocks at the upper right corner and the lower left.  They don’t show as much in the photo as they do in person, so maybe that’s just my eyes.

I’m off baby blanket duty for a little while.  I’m waiting for Gen 2 of the Turtle Loom to come out so I can make a hexagonal blanket for my grand-niece.  She’s named for my grandmother who was an avid quilter.  Grandmother’s Flower Garden was Grannie’s favorite quilt pattern so I’m planning a similar design in a pin loom blanket for her namesake.

We’re having an overshot weave-a-long over at FiberKind.  One of the participants mentioned a book that she had luckily acquired – Foot Treadle Loom Weaving by Edward Worst.  I’d never heard of it before so I dutifully went off to eBay and scored an absolute deal!  I got both editions of the book – the 1924 copyright original edition, Foot-Power Loom Weaving and a revised edition, Foot Treadle Loom Weaving from 1976.  The books are almost identical.  The drafts are easier to read in the newer version, but they are both valuable additions to my weaving library.  There are 4-shaft, 6-shaft, 8-shaft and 16-shaft drafts in the book and all were collected from traditional weavers.  There are even plans to build a Scandinavian-style loom in the back of the book!

These books are right up there with Marguerite Porter Davison’s A Handweaver’s Pattern Book and Carol Strickler’s A Weaver’s Book of 8-Shaft Patterns.  They belong on every weaver’s bookshelf.  Worst’s books are long out of print, so it’s a treasure hunt to find a copy, but well worth the effort. 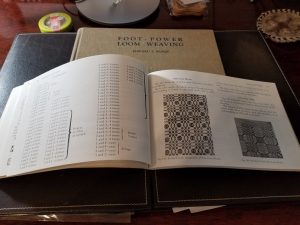