Not Your Mother’s Overshot Workshop has come and gone.  What fun!!  This was a two-day workshop on pushing the overshot structure past its basic limits.  We even did freeform overshot and opphämpta.

Overshot is my favorite structure.  You can get such beautiful, complex patterns with only a simple 4-shaft loom.  If you’re willing to go slow, you can even get it with a rigid heddle loom!  Cool stuff! 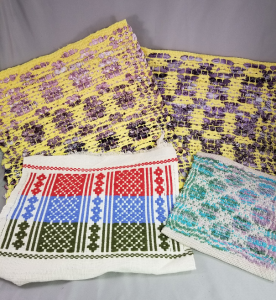 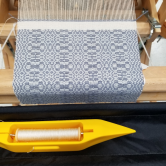 We did do a couple of more classic-looking overshot where we explored the use of different weft patterns against the same warp.  We also looked at a basic warp / weft pattern but with the tabby or ground warp and weft being rainbow colors.  So pretty!  I need to get photos of it. 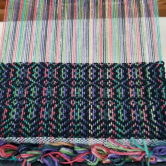 We did a few projects that broke the normal thread weight rule for overshot.  We also used very, very non-traditional materials – even a pot-scrubbing yarn!

Probably the most advanced techniques we worked with were freeform overshot and the Swedish opphämpta technique.  I brought my traveling counterbalance loom set up with the long-eye heddles to do the patterning.  I used a classic Scandinavian knitting pattern.  I think it looks lovely as a woven pattern!!  The freeform technique was the slowest and most challenging.  I need to work with that to make it more accessible. 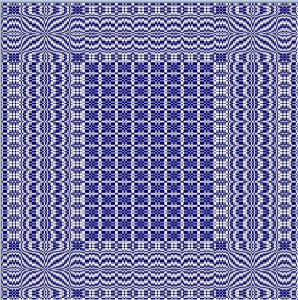 As always, it’s been a busy couple of weeks.  One of the members of my online weaving group on Our Unraveled indicated that she would like to make towels in the Lee’s Surrender overshot draft.  Now Lee isn’t easy.  It may be only a 4-shaft overshot draft, but it combines several elements, has a wicked border and isn’t for the faint of heart.  Or at least isn’t for beginning weavers.  The good news is that it is in Marguerite Porter Davison’s A Handweaver’s Pattern Book.  The original book is from the 50’s and the draft is written out in the older format, but it still manageable.  (Hint: beware of getting a new version of the book.  I’ve heard that it has been gutted and has maybe half the drafts of the earlier editions.)

I don’t know where the original draft came from.  In the book Davison says that it is adapted from an earlier pattern.  Since weaving drafts, like quilt patterns, are frequently named for historical events, I assume this one is truly named for Lee’s Surrender of the Confederate troops at Appomattox Courthouse.  If so, that would place it in the late 1800’s.  The border is based on the Blooming Leaf pattern that appears in other overshot drafts, and this gives the border its intricate, eye-appealing size.  The tables that form the center design are themselves quite simple  – a star design commonly found in overshot.  However, they allow the piece to be wider or narrower at the weaver’s discretion simply by adding or removing repeats. 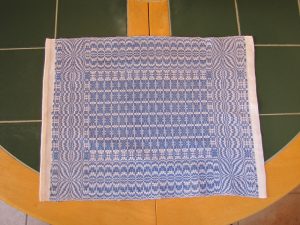 Lee and I are no strangers.  Many years ago I decided to tackle this draft in a very fine thread intending to make a set of four place mats in the classic blue pattern on white background.  One must understand, however, that I am a Southerner.  As nearly as I an tell, all eight of my great-great-grandfather’s fought for the Confederacy.  So either some curse got thrown in my direction or I got a bad cone of white cotton, but it was one broken warp thread after the other.  After two place mats and 20+ broken warp threads, I cut the piece off the loom.  Still, the two place mats turned out beautifully.

I volunteered to make the draft for the requested towels and post it to the group.  I also suggested that we use it as an overshot weave-a-long or WAL.  Several people agreed and I think we’ll get going on the first of September.  I was able to find the original notes and WIF (Weaving Information File) I entered when I made the place mats.  I hadn’t finished the treadling diagram, but it wasn’t hard to finish up.  I did all the calculations for two towels and wrote up the instructions.  Unfortunately, I couldn’t test the towels prior to releasing the PDF.  I’m hopeful that everything is fine and I didn’t make any mistakes.  I suppose we’ll see.

Equally unfortunately, I decided to make the towels in Ashford’s 10/2 and 5/2 cotton.  Sadly, we’re out of the colors I wanted at Yarnivore,  Hopefully, the cones will be in before long and I’ll be able to get the towels on the loom.  I’m planning to get the origami blouse fabric off the old Schacht Standard so the towels can go on.

And hopefully there will be NO broken warp threads!! 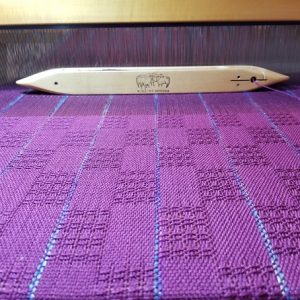